The vest in question is for J (he’s 8) and his specifications were very exact – he wanted a vest that fell below the waist, had a hood and a pocket, and it had to be “soft”.  I started it right after I finished Ty’s sweater.

For this project, I did make a swatch.  I substituted a thicker yarn than called for.  J picked everything out himself!

Knitting on a car trip.

Over the December holidays we went to San Francisco and Monterey so there was plenty of time in the car to knit.  I knit both the front and the back of this vest at the same time.  It was a little tricky when it came to the split in the front, but it seemed to work out well.

After the front and back were finished, the arm bands were added.  I really like the darker green as a contrast to the variegated. 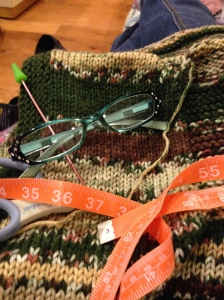 Prepared for surgery and reconstruction.

Off came the armband and out came the shoulder seam.  This is where I discovered that the mistake was not quite as bad as I had thought.  I thought I had not knit enough rows to make the neckline curve, but I had just sewed the vest together wrong.  WHEW!!  What could have been a many day fix was now just a couple of hours.

The vest in all it’s glory!  We went to the beach the very next day after this vest was finished and J wanted to wear it.  He hasn’t taken it off yet!

That pocket is his most favorite thing about the vest.  The hood runs a really close second.  It makes me so happy to see my kids wearing the things I made them!

One thought on “A Vest Finally Finished!”

The best sewing, knitting, crochet, macrame, and weaving classes and camps of all time